One of the first economic lessons taught at high school is that market prices are influenced by supply and demand (does anyone remember the supply and demand curve!). I’m not here to challenge this theory. Sydney in particular, for example, has seen large residential property price gains over the last 4 years. And what has the common theme in Sydney been? Supply levels have been severely lacking while demand has been very strong.

As someone who on a daily basis see’s the concerns and genuine fear amongst younger generations (who are wondering how they will ever get into the property market), I certainly welcome Treasurer Scott Morrison’s recent announcement on the 24th of October to put housing affordability back on the federal Government agenda.

What is the Government’s plan? The Treasurer says the Government will tackle housing affordability through working with State governments to increase supply.

However, there are some serious concerns with the Treasurer’s announcement. Firstly, the Government lacks details as to how exactly housing supply will be increased. I do not believe that simply talking about the need for more supply will solve the lack of housing supply issue. This has not worked in the past.

Secondly, developers may start to get nervous about all the recent ‘oversupply’ noise. This could lead to Governments releasing more land but developer construction actually slowing down.

More supply is undeniably necessary. Perhaps in the short term we are going to witness some small quantities of oversupply in certain niche housing markets around the country, but you only have to look at recent population forecasts to see that for the medium term and long term, we have as a severe lack of housing across the country.

So I do hope for the sake of first home buyers (both present & future generations) that the construction boom will continue and that our Governments will foster this.

However, neither the lack of concrete plans by the Government nor the risk of a construction slowdown are my biggest concerns. There is something far more immediately concerning and that is regarding the current cost of entry into the housing market.

Recently First Home Buyers Australia conducted a national survey of 500 aspiring first home buyers. One question asked first home buyers what the biggest problem they faced was. The answer? It wasn’t ‘unaffordable housing’, but rather ‘accumulating a deposit’.

When you take a second to think about it, it’s not really all that surprising. Everyone say’s that with record low interest rates, why are younger generations complaining? The answer is quite simple. Record low interest rates may help those with a mortgage (i.e. lower mortgage repayments) but it doesn’t help people who are still trying to save a deposit big enough to enter the market.

My biggest concern is that Morrison’s plan does little to address the issue that younger generations face the highest deposit ever required in history in order to qualify for a home loan.

If housing supply does continue to increase as the Treasurer hopes (and even keeps up with our growing population needs) than property prices should stay about even (if you believe in the market price = demand v supply economic theory). However, this will mean the large deposit required to enter the housing market will remain.

So what needs to be done to address the real barrier of entering the housing market?

First Home Buyers Australia is arguing for the need of two key policies:

The FHSA was axed by former treasurer Joe Hockey who famously advised younger Australians to “get a good job that pays good money”. It was axed partly due to the lack of take up. But with first home buyers struggling to save a deposit, it needs to return, with more flexible features such as the ability to salary sacrifice a proportion of pre-tax wages (in a similar fashion to how anyone can salary sacrifice into super). It also needs to be better promoted by the Government, banks and the property industry this time around.

The alternative is to keep letting the market be (in school terms, laissez-faire) and maybe to keep talking about the need for more supply. But this isn’t working. First home buyer activity is currently stuck at around all-time record lows. And until something is done to address the cost of entry to the housing market, this dire trend will very likely continue.

Click the image below to see the REIA Magazine November edition 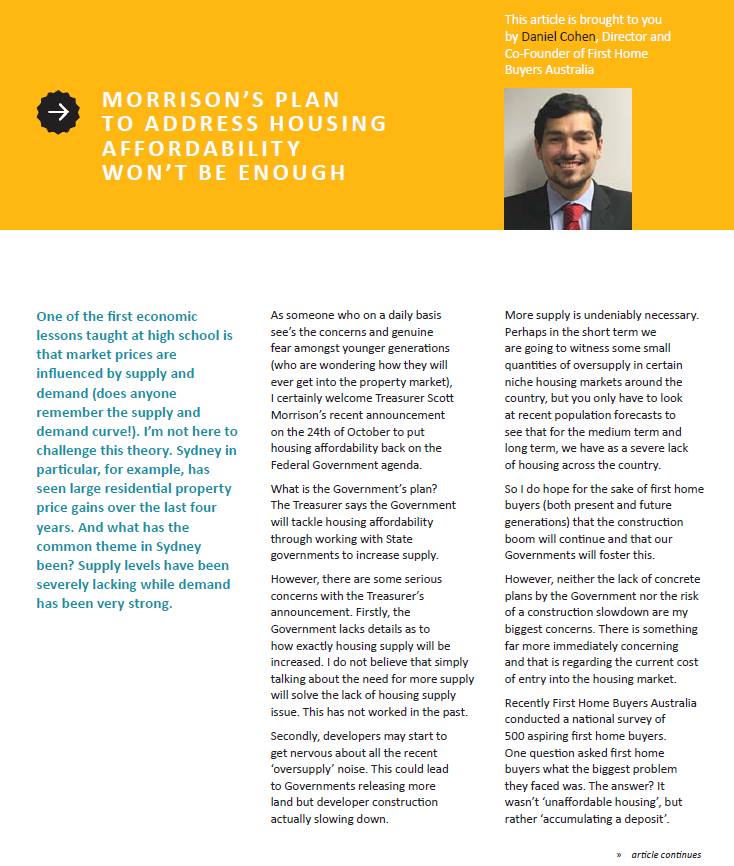